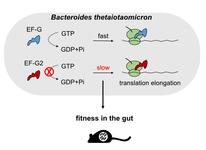 Protein synthesis is crucial for cell growth and survival yet one of the most energy-consuming cellular processes. How, then, do cells sustain protein synthesis under starvation conditions when energy is limited? To accelerate the translocation of mRNA–tRNAs through the ribosome, bacterial elongation factor G (EF-G) hydrolyzes energy-rich guanosine triphosphate (GTP) for every amino acid incorporated into a protein. Here, we identify an EF-G paralog—EF-G2—that supports translocation without hydrolyzing GTP in the gut commensal bacterium Bacteroides thetaiotaomicron. EF-G2’s singular ability to sustain protein synthesis, albeit at slow rates, is crucial for bacterial gut colonization. EF-G2 is ~10-fold more abundant than canonical EF-G1 in bacteria harvested from murine ceca and, unlike EF-G1, specifically accumulates during carbon starvation. Moreover, we uncover a 26-residue region unique to EF-G2 that is essential for protein synthesis, EF-G2 dissociation from the ribosome, and responsible for the absence of GTPase activity. Our findings reveal how cells curb energy consumption while maintaining protein synthesis to advance fitness in nutrient-fluctuating environments.

Simian immunodeficiency viruses (SIVs) are lentiviruses that naturally infect non-human primates of African origin and seeded cross-species transmissions of HIV-1 and HIV-2. Here we report prefusion stabilization and cryo-EM structures of soluble envelope (Env) trimers from rhesus macaque SIV (SIVmac) in complex with neutralizing antibodies. These structures provide residue-level definition for SIV-specific disulfide-bonded variable loops (V1 and V2), which we used to delineate variable-loop coverage of the Env trimer. The defined variable loops enabled us to investigate assembled Env-glycan shields throughout SIV, which we found to comprise both N- and O-linked glycans, the latter emanating from V1 inserts, which bound the O-link-specific lectin jacalin. We also investigated in situ SIVmac-Env trimers on virions, determining cryo-electron tomography structures at subnanometer resolutions for an antibody-bound complex and a ligand-free state. Collectively, these structures define the prefusion-closed structure of the SIV-Env trimer and delineate variable-loop and glycan-shielding mechanisms of immune evasion conserved throughout SIV evolution. 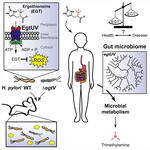 A microbial transporter of the dietary antioxidant ergothioneine.

Low-molecular-weight (LMW) thiols are small-molecule antioxidants required for the maintenance of intracellular redox homeostasis. However, many host-associated microbes, including the gastric pathogen Helicobacter pylori, unexpectedly lack LMW-thiol biosynthetic pathways. Using reactivity-guided metabolomics, we identified the unusual LMW thiol ergothioneine (EGT) in H. pylori. Dietary EGT accumulates to millimolar levels in human tissues and has been broadly implicated in mitigating disease risk. Although certain microorganisms synthesize EGT, we discovered that H. pylori acquires this LMW thiol from the host environment using a highly selective ATP-binding cassette transporter—EgtUV. EgtUV confers a competitive colonization advantage in vivo and is widely conserved in gastrointestinal microbes. Furthermore, we found that human fecal bacteria metabolize EGT, which may contribute to production of the disease-associated metabolite trimethylamine N-oxide. Collectively, our findings illustrate a previously unappreciated mechanism of microbial redox regulation in the gut and suggest that inter-kingdom competition for dietary EGT may broadly impact human health. 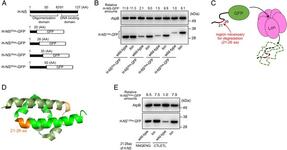 Degradation of gene silencer is essential for expression of foreign genes and bacterial colonization of the mammalian gut.

To express foreign genes, enteric bacteria must overcome the silencing effects caused by the heat-stable nucleoid structuring (H-NS) protein. Overcoming gene silencing by H-NS has been largely ascribed to proteins that compete with H-NS for binding to foreign DNA. However, we now report that H-NS proteolysis is a general mechanism of overcoming foreign gene silencing and essential for colonization of the murine gut by the enteric bacterium Escherichia coli. Both E. coli and Salmonella enterica serovar Typhimurium express foreign genes by degrading H-NS but do so under disparate conditions, likely reflecting their distinct lifestyles.

The flagellar motor is a bidirectional rotary nanomachine used by many bacteria to sense and move through environments of varying complexity. The bidirectional rotation of the motor is governed by interactions between the inner membrane-associated stator units and the C-ring in the cytoplasm. In this review, we take a structural biology perspective to discuss the distinct conformations of the stator complex and the C-ring that regulate bacterial motility by switching rotational direction between the clockwise (CW) and counterclockwise (CCW) senses. We further contextualize recent in situ structural insights into the modulation of the stator units by accessory proteins, such as FliL, to generate full torque. The dynamic structural remodeling of the C-ring and stator complexes as well as their association with signaling and accessory molecules provide a mechanistic basis for how bacteria adjust motility to sense, move through, and survive in specific niches both outside and within host cells and tissues. 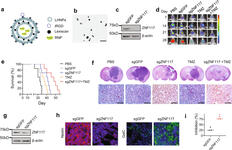 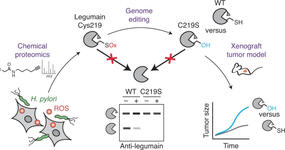 Oxidative stress is a defining feature of most cancers, including those that stem from carcinogenic infections. Reactive oxygen species can drive tumor formation, yet the molecular oxidation events that contribute to tumorigenesis are largely unknown. Here we show that inactivation of a single, redox-sensitive cysteine in the host protease legumain, which is oxidized during infection with the gastric cancer-causing bacterium Helicobacter pylori, accelerates tumor growth. By using chemical proteomics to map cysteine reactivity in human gastric cells, we determined that H. pylori infection induces oxidation of legumain at Cys219. Legumain oxidation dysregulates intracellular legumain processing and decreases the activity of the enzyme in H. pylori-infected cells. We further show that the site-specific loss of Cys219 reactivity increases tumor growth and mortality in a xenograft model. Our findings establish a link between an infection-induced oxidation site and tumorigenesis while underscoring the importance of cysteine reactivity in tumor growth﻿. 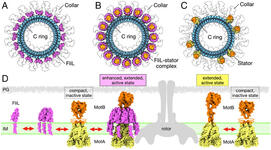 Bacterial flagellar motors are rotary machines that can power motility in various fluid and surface environments, including within hosts. Activation of the stator complex MotA/MotB is required for torque generation and motor rotation. During activation, the stator complex is expected to undergo an extensive conformational change to allow ions to flow through its transmembrane channels to generate torque. However, the detailed mechanism underlying stator activation remains poorly understood. Here, we use the Lyme disease–causing spirochete Borrelia burgdorferi as the model system to reveal the stator complex and its interaction with the FliL ring, using cryo-electron tomography and subtomogram averaging of flagellar motors from wild-type, ΔmotB, ΔfliL, and ΔfliLmotAB mutants. Upon recruitment of stator units to the motor, FliL oligomerizes from a partial ring into a full ring, which wraps around the MotB periplasmic linkers and stabilizes the stator complex in an extended, active conformation, thus enabling a continuous influx of ions to generate higher torque. Furthermore, we provide evidence that FliL can mediate the assembly of stator complexes around the motor, thereby regulating stator and motor function. Given that FliL and the stator complex are ubiquitous in flagellated bacteria, these mechanisms may be utilized by various bacteria to modulate torque and motility in response to changing environmental conditions. 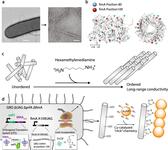 Advances in synthetic biology permit the genetic encoding of synthetic chemistries at monomeric precision, enabling the synthesis of programmable proteins with tunable properties. Bacterial pili serve as an attractive biomaterial for the development of engineered protein materials due to their ability to self-assemble into mechanically robust filaments. However, most biomaterials lack electronic functionality and atomic structures of putative conductive proteins are not known. Here, we engineer high electronic conductivity in pili produced by a genomically-recoded E. coli strain. Incorporation of tryptophan into pili increased conductivity of individual filaments >80-fold. Computationally-guided ordering of the pili into nanostructures increased conductivity 5-fold compared to unordered pili networks. Site-specific conjugation of pili with gold nanoparticles, facilitated by incorporating the nonstandard amino acid propargyloxy-phenylalanine, increased filament conductivity ~170-fold. This work demonstrates the sequence-defined production of highly-conductive protein nanowires and hybrid organic-inorganic biomaterials with genetically-programmable electronic functionalities not accessible in nature or through chemical-based synthesis.

Microbial communities frequently invade one another as a whole, a phenomenon known as community coalescence. Despite its potential importance for the assembly, dynamics, and stability of microbial consortia, as well as its prospective utility for microbiome engineering, our understanding of the processes that govern it is still very limited. Theory has suggested that microbial communities may exhibit cohesiveness in the face of invasions emerging from collective metabolic interactions across microbes and their environment. This cohesiveness may lead to correlated invasional outcomes, where the fate of a given taxon is determined by that of other members of its community—a hypothesis known as ecological coselection. Here, we have performed over 100 invasion and coalescence experiments with microbial communities of various origins assembled in two different synthetic environments. We show that the dominant members of the primary communities can recruit their rarer partners during coalescence (top-down coselection) and also be recruited by them (bottom-up coselection). With the aid of a consumer-resource model, we found that the emergence of top-down or bottom-up cohesiveness is modulated by the structure of the underlying cross-feeding networks that sustain the coalesced communities. The model also predicts that these two forms of ecological coselection cannot co-occur under our conditions, and we have experimentally confirmed that one can be strong only when the other is weak. Our results provide direct evidence that collective invasions can be expected to produce ecological coselection as a result of cross-feeding interactions at the community level. 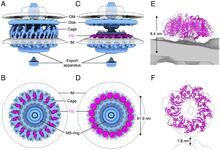 The flagellar motor stator is an ion channel nanomachine that assembles as a ring of the MotA5MotB2 units at the flagellar base. The role of accessory proteins required for stator assembly and activation remains largely enigmatic. Here, we show that one such assembly factor, the conserved protein FliL, forms an integral part of the Helicobacter pylori flagellar motor in a position that colocalizes with the stator. Cryogenic electron tomography reconstructions of the intact motor in whole wild-type cells and cells lacking FliL revealed that the periplasmic domain of FliL (FliL-C) forms 18 circumferentially positioned rings integrated with the 18 MotAB units. FliL-C formed partial rings in the crystal, and the crystal structure–based full ring model was consistent with the shape of the rings observed in situ. Our data suggest that each FliL ring is coaxially sandwiched between the MotA ring and the dimeric periplasmic MotB moiety of the stator unit and that the central hole of the FliL ring has density that is consistent with the plug/linker region of MotB in its extended, active conformation. Significant structural similarities were found between FliL-C and stomatin/prohibitin/flotillin/HflK/C domains of scaffolding proteins, suggesting that FliL acts as a scaffold. The binding energy released upon association of FliL with the stator units could be used to power the release of the plug helices. The finding that isolated FliL-C forms stable partial rings provides an insight into the putative mechanism by which the FliL rings assemble around the stator units.