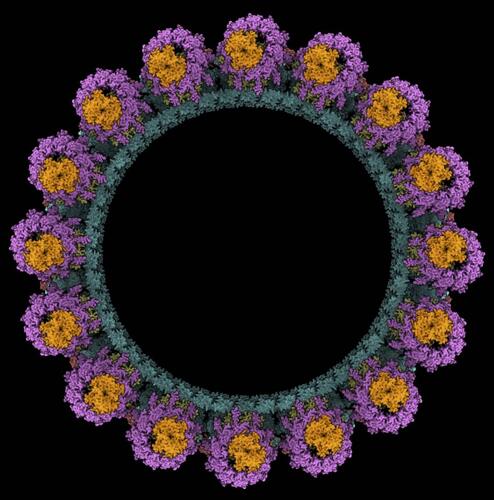 When pathogens invade a human host, they need maximum ability to move through the body as they navigate adverse environments and cause infection. Their ability to drill themselves through gel-like surroundings is often made possible through the rotation of a squiggly, tail-like machine known as the flagellum.

How bacteria move around, survive, and cause infection in the body has fascinated scientists, but the roles of certain key players involved in the mechanism of motility are still poorly understood. Now, for the first time, Yale researchers have visualized a unique ring structure that stabilizes the motor of the flagellum and enhances bacterial movement. The researchers published their findings in Proceedings of the National Academy of Sciences on March 7.

Flagella propel bacteria through the body

“The flagella of bacteria need to generate high torque to help them move in their environment,” says Jun Liu, PhD, professor in the Department of Microbial Pathogenesis and Microbial Sciences Institute, and senior author of the study. “We found a structure that is a piece of the puzzle, helping us understand why some bacteria can swim and disseminate within diverse host environments to cause infection.”

The flagellum has three components—the motor, hook, and filament. The rotation of the filament allows bacteria to move around in their environment. The motor embedded in the bacterial cell membrane rotates—just as a car motor spins beneath the hood of the vehicle—to drive the movement of the filament outside. 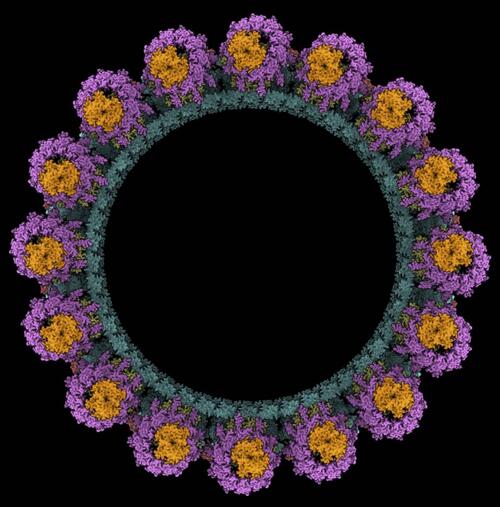 This motor contains a large structure known as the C-ring, which requires the assistance of smaller, dynamic structures known as stators in order to rotate. When a bacterium needs to move, it recruits stators to the C-ring, where they undergo a conformational change and become extended. Then, the force from the flow of hydrogen ions through the stator channels drives the C-ring rotation, which in turn drives the motor and filament to rotate.

“Before, we didn’t know what the stators do exactly to rotate the motor,” says Shuaiqi Guo, PhD, associate research scientist and first author of the study. In 2020, the team found that the stators not only experience a conformational change but also rotate, like gears driving the belt of a motor. These slender, flexible structures need to rotate very fast, and without stabilization this rapid spinning would introduce instability to the whole motor. The members of the Liu lab wanted to figure out how the stators stay in place as they rotate, and in their latest studies, they found that this ability is made possible by a protein called FliL.

“This protein has been very mysterious in the field for thirty years,” says Guo. “It’s very important for bacterial motility in complex environments, but scientists have been heatedly debating its function and structure.”

To better understand FliL’s role in flagellar motility, the team used a technique called cryo-electron tomography. The technology provided a high-resolution, close-up look of the flagella of the Lyme disease-causing Borrelia burgdorferi and stomach ulcer-causing Helicobacter pylori. They found that FliL proteins, which are also ring-shaped, are responsible for holding the stators in place. Individual FliL rings, the team discovered, are important for the assembly and stabilization of each of the sixteen stators around the C-ring. They also found that genetically deleting this protein severely impairs the ability of bacteria to move. “FliL is an important part of the flagellum’s gear box that allows the motor to rotate,” says Guo. “Without this component, it’s like the gear box is missing a screw, and the motor falls apart when it is rapidly rotating.”

Motility is essential to bacteria’s ability to cause disease. If bacteria can’t move within the body, dangerous infections are far less likely. The researchers hope to keep building their knowledge of how bacteria move and cause illness, with the ultimate goal of designing therapies that inhibit bacterial movement. Greater insights into motility may also help scientists develop effective drug delivery techniques. “If we know all of the components of the machine that helps bacteria move, we can try to engineer and make use of it for medical applications,” says Guo.

“We’ve made incremental progress in understanding this fascinating machine,” says Liu. “We hope to continue to work on this for decades to solve how the flagella of different bacteria uniquely evolved. We’ve just touched the tip of the iceberg of understanding this beautiful structure.”

Two parallel PNAS papers on FliL from the Liu Lab